This is generally considered one of Marvels 1970s triumphs and a predecessor of the modern graphic novel. While it has some flaws, its absolutely fascinating and contains some of the best comic art Ive ever seen.

Of the two artists, Billy Graham is the better. But some of Rich Bucklers work is just as incredible. While the art of both is in the Marvel house style, both do work with layouts that are just mind blowing. The way that Graham both uses and ignores panels to create a sense of movement and tension is unlike anything Ive seen. Graham also draws some amazing action scenes that are coherent and thrilling. Buckler, on the other hand, has a title page that just knocked my socks off. I put some example of both at the bottom of this review.

The story Don McGregor is good, but very 1970s. The overall arc of the meaning of revolution and what it means to rule is compelling, as is the palace intrigue. The characters are well rounded and the stakes feel very real. But something about it just didnt make me want to blast gleefully through each issue. Maybe its pacing? The cuts between locations and storylines were a bit awkward and jarring. Its also fairly decompressed, like modern comics, but with lots of text, like Silver Age. Which makes for an odd (and slow) read. However, I think the biggest weakness is that the prose can be so purple that, at times, it defies comprehension.

After the main Panthers Rage arc (issues 6-18), the story jumps the United States where the Black Panther fights the Ku Klux Klan. Which should be amazing, but doesnt quite work. Its overstuffed (a murder mystery, two competing Klans, a reunion with TChallas girlfriends parents, shady land deals, etc.) which makes it a bit of a slog. But there are a few great action scenes. However, theres also a legitimately bad issue (#22) which tells a story of Reconstruction era harassment of freed slaves by a Klan leader called the Soul Stealer. However, it tells the story twice in parallel: once the way it happened; once as a fantasy with TChalla there to save the day. Its both eye-rolling and kind of icky in that If I lived back then, I would totally have killed Hitler! kind of way.

Anyway, after that they introduce more over complicated shenanigans, including a super powered character with no motivations named Wind Eagle. Then it got cancelled and replaced with a totally bonkers Jack Kirby Black Panther series. A few years later, after Kirby got fired, some other writers come back and try to pick up McGregors threads and weave them in to Kirbys goofy-ass adventures. It works better than youd expect. 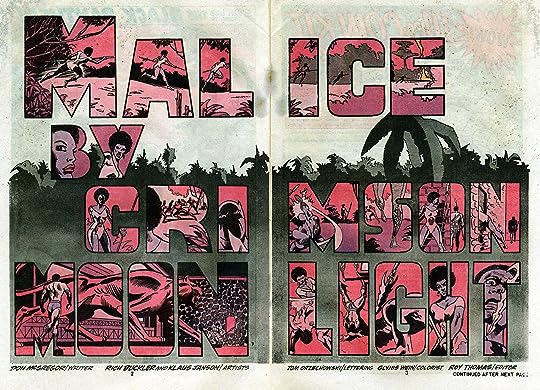 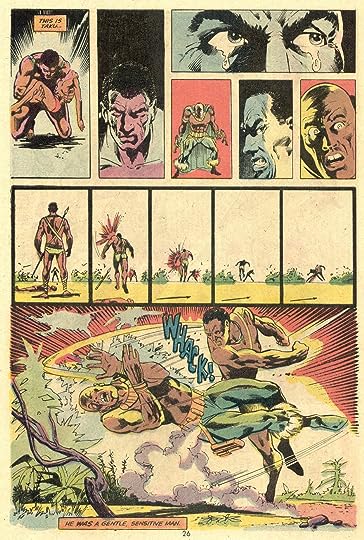 Appearing in "Panther's Rage" T'Challa returns to Wakanda to find his homeland threatened by Erik Killmonger. Killmonger had been ravaging villages to attract the Black Panther's attention.
Don McGregor

T'Challa returns to Wakanda to find his homeland threatened by Erik Killmonger. Killmonger had been ravaging villages to attract the Black Panther's attention. When T'Challa stops the leopard by apparently snapping its jaw, Killmonger finishes off a fatigued T'Challa and throws him over a waterfall. To be Continued In the jungle the animals have become restless, this mood comes to the attention of Lorna the Jungle Girl although she does not know what the cause is. Searching the jungle she spots a helicopter swooping down on a herd of Gazelles and snares one in it's net. Lorna tries to stop the helicopter but fails when the chopper takes off.

Jungle Action is the name of two American comic book series published by Marvel Comics and its s precursor, Atlas Comics. The first series — published during a time of few superheroes, when comics featured an enormous assortment of genres — was a multi-character omnibus that ran six issues Oct. Each starred the blond-haired, Tarzanesque Lo-Zar, Lord of the Jungle renamed "Tharn" in s reprints, presumably to avoid confusion with Marvel's modern-day Ka-Zar ; [1] Jungle Boy , the teenaged son of a renowned hunter; [2] Leopard Girl , created by writer Don Rico and artist Al Hartley ; [3] and Man-Oo the Mighty , the jungle-protector gorilla hero of narrated nature dramas.
caring for sick parents quotes

What, no mention of Klaus Janson, Steve? I would suggest his inks are probably responsible for the improved quality of Buckler's artwork you can see the effect more clearly in the original run of Deathlok, when Janson started inking halfway through the series and suddenly it looked soooo much better Otherwise, The set-up is simple.

JavaScript must be enabled to use this site. Please enable JavaScript in your browser and refresh the page. Auction in progress, bid now! Weekly Auction ends Monday September 23! New Black Panther stories begin.

Meaning of maulana in arabic

The meal that heals enjoying intimate daily communion with god

When your ex tries to come back quotes

How do i delete books from my kindle cloud