A New Hope has always been one of my favourite Star Wars films, most likely because it was my very first glimpse at something that would eventually develop into an epic. Luke Skywalker’s story is where it all began, and I really did enjoy seeing it in this form. The artist has rendered the planetary systems, the deserts of Tatooine and the oppressive nature of the Death Star perfectly. The environments look great, but there are a few issues with the characters. So, I have mixed feelings about its overall quality.

*It must be noted that the cover art image is a modern rendering, and is in no ways a reflection of the illustrations in here that were done in the 70s. 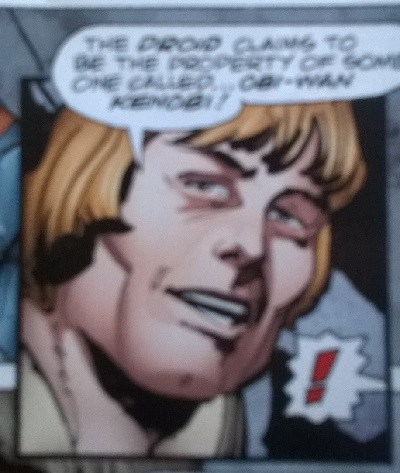 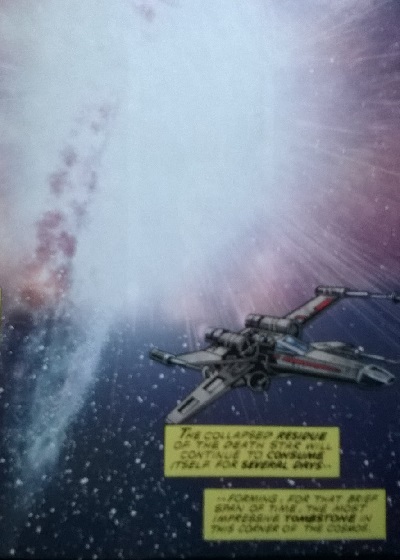 Luke comes across in the necessary degrees of naive; he acts young, though in some of the images he actually looks older than Han Solo. I’ve had a peak at the second instalment (The Empire Strikes Back Comic) and his rendering is much more appropriate. He actually looks like Mark Hamill rather than some random square jawed dude who needs a good night’s sleep. So his appearance, at odds with the on screen version, is just an issue with this first instalment. I’m glad it improved, but it does make the series feel a little inconsistent. It’s a double edged sword really. The space battles are where the illustrator’s skill comes into play. The colouring is spot on, and the explosive effects are quite impressive. Visually speaking, they were the best aspect of the graphic novel. The fight between Ben Kenobi and Vader was also quite good. Kenobi’s death was incredibly dramatic even in this form.

I’m glad to say that this edition lacked any originality. It is basically an exact copy of the events in the movie. This is a good thing, of course. There isn’t a single plot deviation or major inconsistency that I detected. It’s all very true to its origins. It needed to be.

Kenobi has always been the Skywalker’s protector. Firstly, at his master’s behest, he rescues the young Anakin and trains him in the ways of the force. Secondly, he looks after Anakin’s son from a distance, and insures the heir to the Jedi survives. He is Luke’s silent guardian; his shield against the Empire. He is the true hero of this story. Sometimes I just feel like the man deserves a little bit more recognition. He gave his life to the Skywalker’s. He was a wise and powerful Jedi, one that even mastered death. Few Jedi can say the same. Obi-Wan becomes one with the force and escaped being struck down, does this not make him one of the greatest Jedi of all time? Luke was lucky to have him as a master regardless of how brief the experience was. I think this comes across superbly in this form. He’s a great character.

Overall, this is a fairly good adaption. There is room for improvement but, like I said, the artwork is better in the next edition, which I will also be reviewing at some point soon. The story makes this what it is; it’s like a breakdown of all the important scenes in the film. It captures both the humour and urgency of the situations. The character dynamic are there in full force along with appropriate personalities. It’s like a pleasant reminder of the movie, that I now have an overbearing urge to watch.

I think that’s a good thing, don’t you?

Star Wars: Episode IV A New Hope, originally released as Star Wars, and in the final cut of the film, such as Luke Skywalker's observation of the space battle.
Roy Thomas

The space battles were designed to look like dogfights, the ground battles were designed to look like firefights in the trenches, and the lightsaber duels were actually designed to look like laser-tinged versions of the fights in swords-and-sandals epics. So, naturally, the saga has had a bunch of awesome battle sequences over the years. Even the prequels have great battle sequences. Then Mace Windu gathers up the survivors from his strike team and they enter the arena to take on the Separatists with the full might of the Jedi. And then Yoda brings the cavalry, the now-complete Clone Army, to their rescue. After all these movies, the filmmakers are clearly struggling to come up with new gimmicks for planets, because Crait is covered in salt. Rather than use a small character moment to build to a big battle sequence, Rian Johnson used a big battle sequence to build to a small character moment.

writers debate which scene from Star Wars: A New Hope is the greatest. To modern eyes, the space battle has begun to show its age some.
guided meditation prosperity and success

This article is part of a special StarWars. Best bounty hunter? - Attention is requested to create new articles from these links.

Content approaching. Parts of this article have been identified as no longer being up to date. Please update the article to reflect recent events, and remove this template when finished. It was a crippling blow to the Empire and one of the Rebel Alliance's first major victories. During the Battle of Scarif , Jyn Erso managed to steal detailed plans and design specifications for the Imperial battle station known as the Death Star and transmit them to the Alliance Fleet above; these plans soon made their way to Princess Leia Organa.

T he title of the entire Star Wars franchise is misleading. The amount of warring that happens in the stars is insignificant next to angsty young men worrying about how to use the Force, fast-talking space pirates and lightsaber twirling. So Episode IX is going to have to put the star wars back in Star Wars with a really great space battle. The prequels have almost no good space battles. The mission to destroy the droid control ship in The Phantom Menace is a cringe-worthy snooze fest Bravo squadron? Come on!

Quotes for the ex girlfriend

All is fair in love and war