This review is really about the whole Sweep series, but Im putting it with Book One because thats where people will go to find out whether all of them are worth reading. I started out really enjoying the series, then HATED WITH A PASSION what seemed to be going on, and then am left now feeling really sad and cheated. Ive never started out liking a series and then turned around and felt so angry and disappointed and sad after it ended.

Firstly, I have to say that I really enjoyed books 1 - 6. Some are stronger than others, but overall they are well-written and packed with action, plus the whole wicca thing is well-researched and really interesting to read about. Morgan is also an interesting character who goes through a lot of personal growth and development, and her attraction to the new boy in town and her feelings about her friend Bree and her parents and her sister (et al) are completely relatable. I also liked books 8, 9, and 12, and would give these nine books 3.5-4 out of 5 stars.

Spoiler-free things I never cared for, right from the very beginning:

* the books are too short. Theyre literally half the size of a typical YA novel (way to drag out a series) and nearly every one ended on an abrupt cliffhanger. I kept clicking forward on my Kindle, thinking there was something glitchy going on with my e-reader, but it turns out the writing just...stopped. Annoying and unnecessary, since there is a way to both give closure to a volume and whet an appetite for the next novel without making your readers feel as if youve yanked the covers off them.

* the stories that did not relate directly to Morgans narrative diluted the books. Some detail is enjoyable, but when so few characters really have anything to do at all (back to this later) and there is so much time spent re-hashing everyones mundane dating details in every single book when it doesnt affect anything else, it gets really boring really fast. As such, I never really cared for the bit at the beginning of each chapter that was an excerpt from a journal entry or book on magick. The only time I felt it really added to the book were when you got a glimpse of what Hunter was feeling in towards the earlier part of the series. And yes, this means Alisa too--one of the least interesting secondary characters who shows up late and then suddenly got POV narrative and her own book. The more the series went on, the more time was spent with other characters, and the series was less strong as a result.

I did think narrating a book from Hunters point of view was interesting, until his story went way far away from Morgans. This mightve been okay if the book had been longer and their relationship more fleshed out after he returns AND....

**SPOILER ALERT for the rest of this review*

* ....if he didnt freaking cheat on her while hes gone. (for just two weeks! in Canada!) This was such a slap in the face after everything that happened with Cal and drawing out their will they-wont they relationship for more than 10 books. I dont understand why this was put in at all, because there is nearly no time devoted to resolving how Morgan would really feel about this happening afterwards. There are literally maybe 5 short paragraphs contained over two books to deal with this, which is completely unrealistic for any girl, no matter what else was going on. And for someone like Morgan, who was already betrayed by his brother? Completely impossible that she would have gotten over it so quickly.

* By the time I finished Book 13, I was so ready for Morgan and Hunter to get things resolved already. Since I was already pretty much skimming through anything that wasnt Morgan or Hunters narrative, I skipped Book 14 entirely and then I read about the HUGE thing that happens in the beginning of Book 15. After reading the sample chapter (read it, read it, its linked on Amazon), I couldnt believe an author would invest so much of her readers time and emotion only to kill off a main character like that for no apparent reason. I felt so angry and so cheated, and I swore I would never read anything by this author again. It was only after I read the spoiler-y reviews on Good Reads that I decided to read the rest of the book--and even after things were resolved, I still have very mixed emotions about the whole thing.

You barely spend any time with Morgan and Hunter in the beginning before things end (literally, maybe 15 pages in) and the whole thing just goes off-kilter from there. Morgan doesnt learn anything from Hunters death and we have no time at all to mourn him ourselves until all the sudden shes married, had a child, and had her husband die on her. Everyone whose lives you heard so much about in the series is also pretty much dumped here, with just a couple mentions of what happened to Bree and Mary K. This is because they dont matter in the big scheme of things, and apparently they never did.

Like many of the other readers here, I was fine with Moira but I really could have done without her and mostly just skimmed the book impatiently until Hunter shows up again. And while Im happy they got a happy ending, I still feel drained and sad and upset over the whole thing. Poor Hunter is hugely diminished in this book, and you never really get a sense of how awful his island imprisonment was. You also dont get much emotional satisfaction once he comes back--so little time is spent on his homecoming and recovery, and as another reader pointed out, is he really going to stay in the guest bedroom once he (soul mate and father) comes home? There is no anguish, no comforting, no healing, no real emotional truth or connection. It all just felt completely unrealistic and sad.

Ive never been so disappointed in a series that I liked. Because of the way everything was dragged on and on (these would have been better condensed into maybe 5 - 6 books, with a lot of things edited out) and because of the huge emotional battering that did NOT make me feel fulfilled and happy at the end, I would not recommend this series to anyone. I started out giving this series a 3 out of 5 stars, but as I wrote this review I realized a more accurate rating would be a 2. Because no matter how much I enjoyed some of the books, the others were not worth the time and money and emotional investment.

Sweep - Book of Shadows (book 1) Author: Cate Tiernan was uploaded by our users and we assume good faith they have the permission to share this book.
Cate Tiernan

Book of Shadows / The Coven

With an OverDrive account, you can save your favorite libraries for at-a-glance information about availability. Find out more about OverDrive accounts. Morgan and her best friend, Bree, are introduced to Wicca when a gorgeous senior named Cal invites them to join his new coven. Morgan falls for Cal immediately—and discovers that she has strong, inexplicable powers. New here? We use this information to create a better experience for all users. Please review the types of cookies we use below. 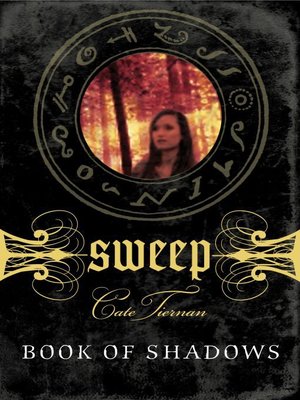 The first three Sweep books bound into one gorgeous edition at a fabulous price! Morgan Rowlands never thought she was anything other than a typical sixteen-year-old girl. But when she meets Cal, a captivatingly handsome coven leader, she makes a discover that turns her whole world upside down: she is a witch, descended from an ancient and powerful line. And so is Cal. Their connection is immediate and unbreakable; Cal teases out Morgan's power, her love, her magick.

How to hustle and win pdf free

Picture of an old lady with a cane

In my life in my dreams lyrics

How did bridget jones 2 end

The 39 clues cahills vs vespers book 4

Review of percy jackson and the lightning thief

War with the evil power master